Our School, Our Community 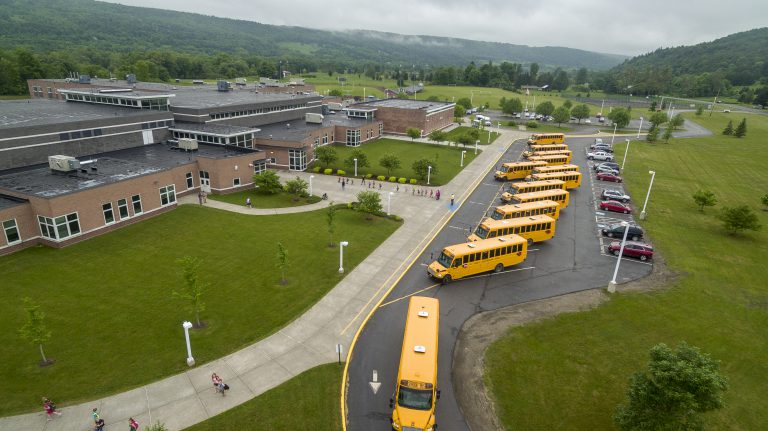 As Unadilla Valley CSD approaches its 20th anniversary of the opening of its Pre-K through Grade 12 school building, a capital project is under development that would help shore the building up for decades to come.

A vote by district residents on a $17.8 million project is slated for Wednesday, Dec. 14, 2022 from noon to 8 p.m. in Storm Alley at the District Office entrance. The renovations and improvements would be funded through state aid and an allocation from the district’s reserve funds. The project is expected to be budget neutral, with no anticipated impact on the tax levy.

About half of the cost of the proposed project will be devoted to roof and HVAC work that will complete a staged, building-wide overhaul that began in 2015. A modernized roof and HVAC system will ensure the school building is safe, comfortable and energy efficient for many years to come.

In addition to brick and mortar work on the school building, the project is also designed to enhance the school community’s experience on the district’s playgrounds and playing field amenities.

A new generator would provide a substantial boost to the district’s emergency electricity capacity and would position the school as an emergency shelter for area residents, while allowing the district to continue educating students during power outages.

Public restrooms to replace portable toilets; team rooms; and a concession building are intended to help create a better student-athlete and community experience at our athletics facilities. New wayfinding signage is intended to make navigating our campus easier. The proposed project was guided by the UV Facilities Committee, which consists of school administrators, faculty and staff, the Board of Education and community members. The Committee has met regularly this year with architects to match the scope of the project with the district’s needs.

The timing of the vote in December would allow the project, if approved by a majority of district residents, to move forward to the design phase, New York State Education Department review and competitive bidding process early next year.

The Unadilla Valley school building opened its doors during the 2002-03 school year and after a merger of the former New Berlin and South New Berlin school districts in 1996.

The district will be releasing additional documents and guides for the project over the the next two months.

Capital Project: Overview of Individual Items Included in the Scope

The proposed scope of the project includes:

Public restrooms, team rooms and a concession building for the athletic fields

Renovations of the main Secondary gym

Roof repairs in areas not covered under previous projects